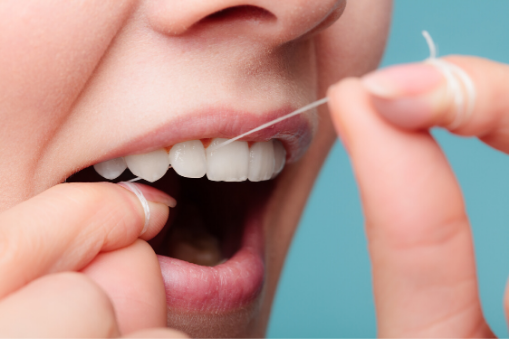 “My gums bleed when I floss.”

Posted on 30th June 2020 at 12:29
What should you do if your gums bleed when you floss your teeth? Should you stop flossing? Find out from Doctor Aviva Riley today.
This might be the sentence I hear the most in my practice, says Doctor Aviva Riley.
When asked if they have any concerns with their gums, my patients often say that their gums bleed only when they floss, and this is the reason why they quit flossing. And if flossing is not the one to blame, patients often say that their gums are sensitive, just like all the members of the family, so they always bleed. Some other female patients even relate gum bleeding to their monthly period.
After admitting that they have bleeding gums, I usually hear “but a little bleeding is normal, isn’t it?”
Well, no it’s not says Doctor Aviva Riley
Despite what many believe, noticing blood while brushing or flossing is neither normal nor healthy! Doctor Aviva Riley explains.
Unfortunately, having bleeding gums is a sign that something wrong is going on, and flossing too hard is not the primary cause, unless you are traumatising your gums with a too aggressive and harsh flossing technique. But most of the time this is not the case; you probably need to change your dental care regimen a bit.
Healthy gums should not be sensitive nor bleed. Bleeding is a sign of an underlying battle occurring in your mouth, an inflammation caused by bacteria building up around your teeth and into your gums and this symptom shouldn’t be overlooked or taken lightly.
Here is what happens.
If you don’t brush enough or if you don’t floss on a daily basis with the correct technique, the dental plaque, a sticky biofilm of bacteria, grows and accumulates on the surfaces within your mouth and under the gum line. This accumulation of bacteria leads to the inflammation of the gums, called “gingivitis”.
Anybody, even the cleverest dental hygienist, who does not floss for a period of 2 weeks will develop gingivitis. Gingivitis is an inflammation of the gums tissues that occurs when bacterial plaque is present, and it can manifest itself in a mild or in a very aggressive and acute form, depending on the kind of bacteria involved, but don’t worry because this condition is completely reversible and heals after a professional dental cleaning and some changes in the oral care routine. But hurry up!
When plaque is not removed above and below the gum line for a long time, it hardens and turns into calculus (tartar) that will further irritate and inflame the gums and also slowly destroy the bone.
Heavy calculus buildup
What people don’t know is that gingivitis, if not treated immediately and if some other risk factors (smoking, diabetes, stress or genetic factors) are present, can lead to a much worse condition, an irreversible chronic and degenerative disease called “periodontitis”, which can lead to the loss of teeth.
Daily flossing is the best way to clean between the teeth and under the gum line and prevent this disease. Flossing not only helps cleaning these spaces, it also disrupts plaque colonies from building up, preventing damage to the gums, teeth, and bone.
Flossing gets where toothbrushes can’t: if you are not flossing, you are only cleaning around 55% of all the areas in your mouth. If you only floss once in a while, you can expect to see your gums bleeding when flossing because the plaque forms already in a few hours and the tissue between your teeth won’t be used to being stimulated. Once you start brushing and flossing correctly, your gums may feel sore and bleed a little at first, but any bleeding should subside in a week or two. When you start flossing often and regularly, the gum tissue between your teeth becomes more resilient, clean and healthy and stops bleeding when flossed.
Most patients will stop flossing an area that bleeds when flossed, while it should be the opposite! If your gums bleed when flossing, you should properly brush and floss the area more often. If you have been flossing for 7-10 days and your gums still bleed when flossing, you should see a dental hygienist. Let your dental hygienist evaluate your flossing technique and whether or not there is a need for gum treatment. We are experts in gum disease!
And remember, daily flossing is a habit that will help you keep a healthy, beautiful smile for life!
Share this post:

Do you want a local dentist that puts  YOU AND YOUR FAMILY FIRST with preventative and cosmetic dentistry delivered in a comfortable and friendly practice?  Arrange a call back today